Promise 1: I will be their God

Promise 1: I will be their God

“For all the promises of God find their Yes in Him. That is why it is through Him that we utter our Amen to God for His glory.” 2 Cor. 1:20

PROMISE 1: I WILL BE THEIR GOD AND THEY WILL BE MY PEOPLE

The numbered letters started to arrive sometime in December. They landed in my mailbox in random order. Number two, followed by number one, then several days later numbers three, four, and six came all at once. Eventually I held twelve letters to

correspond with the twelve days of Christmas. My soldier husband wrote and mailed one each day from Afghanistan. Although the letters did not arrive in order, there was nothing random about the promises my husband communicated. He loved me, he thought about me, and even though we were not together during the Christmas holiday, he would return home to be with me soon.

The season of Advent leading up to Christmas carries the message of hope and anticipation. However, Advent is not rooted in hope—it is rooted in promise—the promise of God being with his people.

Christmas traditions focus on angels, shepherds, and a manger, but the story of Christmas began long before the scene in Bethlehem. The Christmas story began when Adam and Eve disobeyed God and he sent them away from the perfect Garden of Eden. Although Adam and Eve broke fellowship with God, he continued to invite people into relationship with him. Throughout the Old Testament God initiated covenants—a type of divine contract—with his people in order to benefit or bless them.

Long before Jesus came God wrote his promised intentions toward those he loved. Jeremiah 31:33 holds one of these promises:

For this is the covenant that I will make with the house of Israel after those days, declares the Lord: I will put my law within them, and I will write it on their hearts. And I will be their God, and they shall be my people.

Jeremiah addressed this promise to the nation of Israel during a time of their exile. The nation disobeyed God and failed to keep their promise to follow him. Even though God’s people did not remain faithful to him, he promised a new covenant—one that he would not write on stone, as were the Ten Commandments, but he would write the new covenant on hearts. Although God purposed to make this new covenant with the nation of Israel, you and I as Christians are the ultimate recipients.

The Old Testament offers several dozen major promises that point toward the coming of Jesus the Messiah. These prophesies about the Messiah are not random predictions; rather they form a cohesive plan of God. Each promise connects and relates to form the story that culminates in the New Testament arrival of Jesus, who the prophet Isaiah described as “Immanuel, God [is] with us.”

Therefore the Lord himself will give you a sign. Behold, the virgin shall conceive and bear a son, and shall call his name Immanuel (Isaiah 7:14, ESV).

I enjoyed reading the 12 days of Christmas letters from my deployed husband expressing his thoughts and love for me, but they did not compare to the comfort I felt when he returned to hold me in his arms. Likewise, God’s people in the Old Testament held on to the promises written on scrolls, but when Christ came to earth, they could touch the fulfillment of God’s promises with their hands. Now, by faith, we have Christ living within our hearts. The Spirit of Christ in us has written on our hearts the assurance that He is our God, and we are his beloved people. 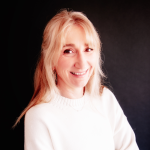 Finding the Holy in the Holiday: Day 24

Finding the Holy in the Holiday: Day 23

Finding the Holy in the Holiday: Day 22

Finding the Holy in the Holiday: Day 21

Finding the Holy in the Holiday: Day 20