JR Tolken created a mystical world full of hobbits, elves, dwarfs, orcs, and woodland creatures amidst humankind in his famous work, The Lord of the Rings. He called the home of mankind “middle earth.” Middle earth is such a fitting description for our current world.

I often find myself in the messy middle.

In the middle of the parenting years with young teens

In the middle of a project

In the middle of cleaning

In the middle of a PCS

In the middle of a deployment

I am even the middle child

You get the picture of what living in the middle looks like.

The middle can be a strange place. A sort of purgatory if you will. It’s not the exciting beginning, and it’s not the climactic ending. It is just the in-between.

So what is one to do when they find themselves as the middle minority?

As an Asian American that grew up in the Midwest I sometimes felt a little out of place. To give you an idea, I graduated in the early 2000’s with over 500 kids in my graduating class. Out of those 500 kids, four (4) were Asian American. You could literally refer to the “Asian girl,” and chances are, you would have been talking about me.

My parents raised me in a loving, Christian home. Race was not a topic of our everyday lives. We just were us.

My dad was a sweet American boy who fell in love with the first foreign exchange student at North Kansas City High School, which was my beautiful mom.  They were pioneers in the biracial dating world in the Midwest in the 1960’s. I often look back and wonder how they did it. My dad only knew American ways and quite frankly, had no interest in learning about other cultures. My mom only knew Korean culture, but quickly acclimated to American culture because she was studying it in school. They just knew, even though they were polar opposites in every way, shape, and form, they loved each other.

My parents encountered many points of tension in their early years of marriage with some biased family members calling my mom a “Jap,” questioning if they should really have kids because they would turn out to be “half breeds.” But against all odds, they stuck it out, and they made it.

Fast forward to my growing up years peppered with trips to both the city in South Korea and the American countryside. My life felt rich, and I loved the exposure to diversity.I didn’t really even know people were racist towards Asians until my older brother can home from our private Christian school at the time and talked about being called a “gook” and a “chink.” These words were glossed over by the school administration telling my brother he needed to learn to forgive and turn the other cheek. I did not really know how much pain he was in until later, after a boy I had a huge crush on called me a “chink,” as well.

It’s amazing how small words can carry so much poison.

You’d have to be living under a rock to not see the boiling over of race relations in our country.  The extremes to which people are feeling and living. The movements that demand you to “choose a side because if you don’t your silence condemns you.”

It is all tension, hate, and anger bubbling to the surface of a simmering pot.

The Asian community has usually remained silent, not wanting to draw attention to themselves out of fear of whether or not anyone would hear their voice. With the onslaught of COVID-19 a new level of rage against Asians has been manifesting itself in the news.  Elderly Asian people walking along and being physically and brutally beaten with racial slurs hurled at them.

I have been watching all of this with heart breaking because I feel so torn in the middle. I see the hurt Black Americans have had to endure, but I have not agreed with the rioting. I see the White Americans trying to understand and also have seen some other White Americans reacting without sympathy. And now the Asian community has been thrown in the mix with random acts of racist violence against them, and some Asians are letting their voice be known. And it all sounds like a loud cacophony of anger.

Honestly, sometimes I’m angry too, and I’m so tempted to wallow in my bitterness.

And then I remember that in the middle of a raging storm, Jesus calmed the sea.

In the middle of a hopeless escape, God parted the sea for his people to escape from their racist captors.

In the middle of mourning, Jesus gave life to Lazarus.

And in the middle of the belly of a whale God brought Jonah to his knees and equipped him to save an entire people group (the Ninevites).

In the middle, there is Jesus.

And that stops me in my tracks. In the middle of my pain and confusion, Jesus is there reminding me that HE is in the middle, and he knows what it is like to be misrepresented, persecuted, and mocked.

I do not have the answers for the hate and division our country is going through right now. But I do know that I see Jesus as the great unifier for all of us. I know HE will prevail. I know he will right the wrong, and he will wipe every tear from our eyes.

But we must remain faithful and wait while we are here in “middle earth.”  We must know and love each other. We need to stop being keyboard warriors and start inviting our real life neighbors into our homes. We need to stop thinking we know everything and approach life with empathy and SEE people how Jesus sees them. Not how the world sees them. We need to be encouraged that in the middle of this world, we will have trouble, but we can take heart because Jesus has overcome the world. (cf John 16:33)

As military men and women, what an opportunity we have to make a difference in this messy middle.

We move so much, all over the country and the world, our fingerprint is worldwide. There is so much rich diversity in the military. I love how the food we devour at gatherings with other military families is such a beautiful hodge podge celebrating different cultural dishes. What a blessing to teach our kids to embrace different people and show them that Jesus loved all people, so we can too. In the middle of our military careers, we CAN make an impact in this issue, even if it’s just for one family that looks different from yours.

So here we are in middle earth where we see glimpses of heaven and of hell. And we wait here in the middle, until God calls us home. That hope is what enables us to bring a little bit of heaven to earth while we are living in the messy middle.

If you’re facing a difficult messy middle, the Planting Roots Prayer team would be honored to pray for you. You can submit your confidential request here. 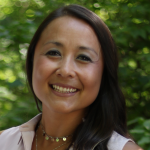 Stephanie is a self-declared ministry Jack of all trades, master of none. Meaning, she sees a need, feels a holy spirit nudging to serve, and then jumps in and helps where she can. Stephanie originally began serving in her local church while teaching high school students. She later served as a Children’s Director at a rapidly growing church in the Kansas City area. Stephanie has been an Army Reservist wife for 13 years and she and her family have been serving the Active Duty Army community for the past two years, where her husband serves as a Chaplain. Together Stephanie and her husband, Kyle, teach classes and volunteer with their local duty station. Stephanie and her family have a heart for the military community and wanting to spread the hope of Jesus at every duty station. Stephanie is a proud mom to her two boys Elijah and Isaiah. She can speak the languages of football, jujitsu, and video games. Stephanie also has two Dachshunds that help complete their family. She loves traveling and adventuring with her family, especially when those travels involve discovering tasty international foods. She wants to see the women of the military have such a firm foundation in Jesus Christ that when the trials of life come, they will not be shaken. The Season of Love It’s the season of JOY Peace on the Earth When God Steps into Hope